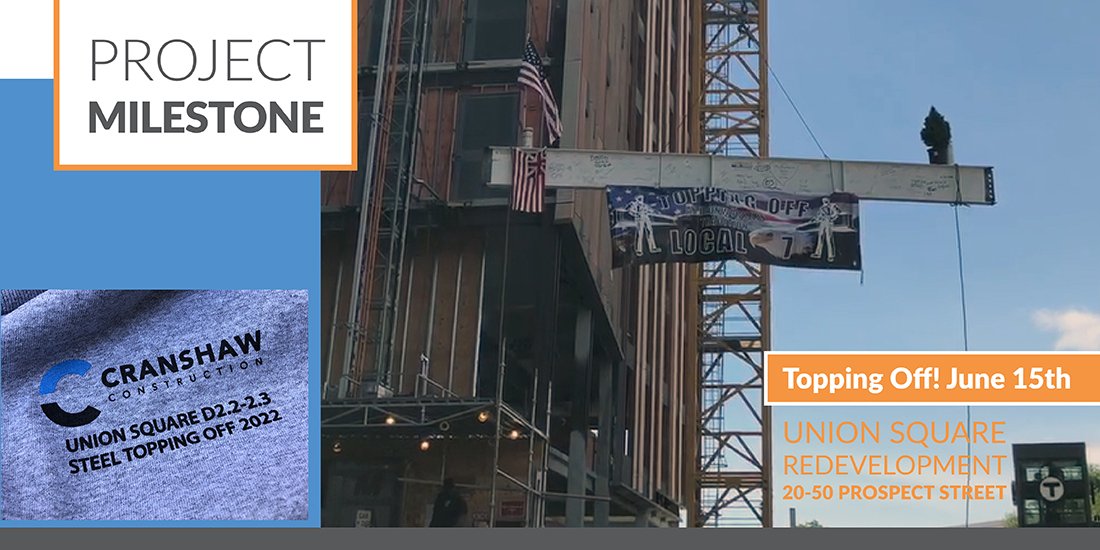 Union Square’s 20-50 Prospect Street in Somerville celebrated a Topping Off ceremony on June 15, 2022. With nearly a 200-person team on site, 50 Prospect’s last steel beam was hoisted into place on the 25-story residential tower. Signed by the team, the beam was adorned with an American Flag and an evergreen tree to symbolize good fortune and job safety.

Both the wood frame and tower structure are fully under construction and precast is continuing on the garage portion of the project. When complete, the project will provide 450 residential units (90 of which will be permanently affordable) in the tower as well as a low-rise adjoining building. Additionally, there is ground floor retail all of which is next to the new MBTA Union Square Green Line station. With portions of the project set to open in 2023, the entire project is slated for completion in January 2024.

Members of the USQ team, Cranshaw Construction and its subcontractors gathered to celebrate this project milestone which was commemorated with custom-designed project t-shirt. Somerville’s Redbones out of Davis Square provided a barbeque lunch for the crew and the team was serenaded with a rendition of the National Anthem of the United States by members of the adjacent life sciences construction site at 10 Prospect!

Congratulations to all involved including ownership – US2, Magellan Development, USAA and Cypress Equity as well as the City of Somerville and our trade partners, specifically Canatal Industries and Structures Derek.

Watch a brief video of the festivities produced by Flaunt Boston.